One of the most celebrated festivities in Mexico is Christmas since it is the moment when families get together, and different traditions such as posadas, piñatas, pastorelas, and Christmas dinner are celebrated.

As you can see, Christmas for us Mexicans has several traditions, one of which I will talk about, “Los Nacimientos' (the nativity), its importance in the world of Christianity, and how it has been adapted as a tradition in Mexican families.

Also, please take a look at the photos of the nativity scenes that we had this year, 2022, at Xcaret Park. No doubt you will love it!

The Story of the Christmas Nativity

It all began with a humble couple, Mary and Joseph, living in Galilee, a small town near Nazareth. Mary was presented with an angel sent by the Lord, who told her that she would have a son who would be the Messiah, the world’s savior.

Mary, a virgin, became pregnant with the holy spirit. Still, they did not know that the emperor of that time, Augustus, had decreed that everyone must return to their hometown, so Mary and Joseph left Nazareth for Bethlehem.

On their arrival in Bethlehem, they sought refuge, as Mary had gone into labor. They asked from house to house, but no one offered them a place to stay; desperate to find shelter, they arrived at a home where the owner told them that he had no room for them, but if they wanted, they could stay in his stable. With no other options, they both agreed to stay in the stable, Joseph prepared the place for the baby’s birth, and shortly after Mary began to give birth and Jesus was born, the one who would be the savior was born in a pesebre (trough).

St. Francis of Assisi created living nativity scenes. When Christmas came, he had an unexpected inspiration to represent the birth of baby Jesus for the first time. The first Christmas nativity scene, known as Nacimientos in Mexico, originated between 1200 and 1226.

With the help of local clerics, he built a little house of straw in the shape of a portal, placed a manger near the chapel, and brought an ox and a donkey. He invited a small group of people to participate in the interpretation of the scene; angels, the baby Jesus, the Blessed Virgin, and Joseph appeared.

This tradition of living nativity scenes spread throughout Europe and continued in this way for years, until in the 15th century, in the city of Naples, where they created the first nativity scene with clay figures.

The Spaniard colonizers introduced this tradition to the “New World” to evangelize the indigenous populations. From that moment on, this tradition has been present in the Catholic community, and every year in December, it is customary to put on this representation.

Mexico adopted this tradition during the colonial era; between the 18th and 19th centuries, Mexican families modified the European features of the figures for Mexican characteristics.

Nowadays, there are at least five styles of Christmas nativity scenes all around Mexico, and these are Italian, Spanish, Mexican, English, and elegant. The differences between one type and another are clothing, facial features, skin color, and Mary’s pose.

People in Mexico have adapted the tradition to their culture so that a nativity may have more elements than another, but among the most traditional are the following:

It is where the nativity is placed and should be simple because it represents the humility and simplicity of the place where the baby Jesus was born.

The pesebre or trough is the wooden container the farm animals consume. According to history, a manger was a makeshift cradle for the baby Jesus. Like the wooden house, it should demonstrate humility and simplicity.

It is the central figure of the Christmas nativity. Besides representing love, it means light in darkness, peace, and tranquility. As a tradition, the family members should lull the baby Jesus during the last minutes of December 24 before placing him in the manger.

The Virgin Mary is a fundamental element of the Christmas nativity, as she is the mother of the Christ Child. The mother of Jesus in the manger represents understanding, goodness, faithfulness, and love for God.

St. Joseph is the father of Baby Jesus, so he is just as important as Mary. Tradition indicates that this character represents strength and obedience.

Melchior, Gaspar, and Baltazar must be included in the Christmas nativity scene since they were the ones who gave Jesus the gold, frankincense, and myrrh. These characters show royal nature, power, and human nature, respectively.

The star of Bethlehem was the guide for everyone to witness the birth of the Child Jesus. This star symbolizes the light of eternal hope.

The Angel was the one who announced the birth of the child Jesus and also took care of the Virgin Mary and St. Joseph. His presence at birth represents mercy, good news, love, and kindness.

The shepherds were essential as they went to Bethlehem to see the birth of the baby Jesus. These characters show humility, simplicity, help, and joy of humble people.

During the birth of Jesus, were present different animals, such as:

The devil is the one who wanted to distract the shepherds so that they would not arrive at the birth of Baby Jesus. He is a symbol of the seven deadly sins.

I hope you join this tradition and put your Nacimiento on Christmas. 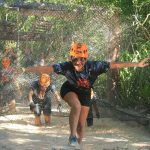