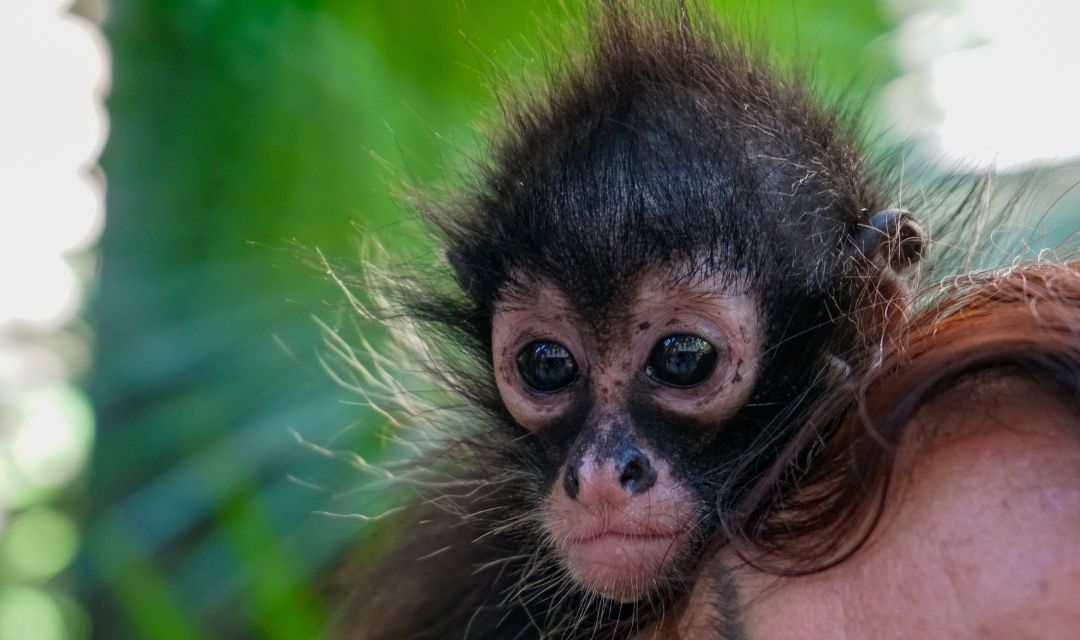 Wildlife conservation
Protection of the spider monkey: rehabilitation and rescue at Xcaret

There are more than 390 species of primates in the world, of which 114 were classified as endangered by the International Union for Conservation of Nature and Natural Resources (IUCN); these include the spider monkey (Ateles geofroyi) and saraguato (Alouatta pigra), which you can meet during your visit to Xcaret by following the black path through the jungle trails.

To share a little more about the conservation, rehabilitation, and rescue work carried out by our team, we spoke with Ana Cecilia Negrete, a veterinarian at Grupo Xcaret with 18 years of experience and leader of the mammal and reptile areas. She’s currently focusing on two very special young spider monkeys, who came into her care under unusual circumstances. Learn more about their story and about the protection of the spider monkey at Xcaret.

Surely during your visit to Xcaret, you admired the regional fauna and our areas dedicated to the protection of different species; while some are part of educational, reproduction, or reintegration programs, others live in the wild in our surroundings and, although we don’t take care of them directly, we also ensure their well-being. In this story, we’ll tell you about the rescue of the two youngest spider monkeys in the park.

You might also find interesting: Mexican endangered species you should read about.

The second calf (female) was not initially an orphan. Monkeys have a social structure where there must be a dominant male within the troop. They’re constantly trying to gain control over other troops, through aggression. In this case, male monkeys were attacking a mother with her baby and Xcaret’s team took them in. The mother had uncoordinated movements and fell to the floor. The initial plan was to rehabilitate the mother and reintroduce her along with her calf, but the mother was badly injured and didn’t survive the surgery. So they cared for the 2–3-month-old calf (still nursing).

What would have happened without the assistance of the team?

This little newborn was completely vulnerable to predators and other threats, so its chances of survival were slim to none. Grupo Xcaret’s intervention gave them a new opportunity and a new troop.

Learn more: Everything you need to know about animal welfare at Grupo Xcaret.

Learning to be a monkey

Imprinting is a natural process based on the identification of a species with the same species. A monkey doesn’t know that he’s born a monkey until he lives with others.

One of the main objectives of the team is to develop typical behaviors of the species in them. The female calf, having spent more time with its mother, arrived already with an imprint and displayed monkey behaviors immediately.

The case of the male was completely different. As he arrived at Xcaret’s facilities as a newborn, he imprinted with the person who cared for him as if he were his mother, this happened with Ana Negrete who gave him the necessary care to survive and encouraged the development of the behaviors of his species. Now, at 1 year 5 months, he’s almost ready to be introduced to his new troop on the Spider Monkey Island.

On the other hand, as we observe the interaction between the female specimen and Ana, it’s very evident that she has adopted the role of her mother: the female explores the environment, but if Ana moves, she follows her. She attends her calls and searches for refuge in her. Creating links is part of their nature and among Conservation Technicians it’s the expected result of daily coexistence and seeking their well-being every day.

Also, it takes an expert and knowledgeable team on the subject to develop behaviors of the species and to help them inhabit their new habitat.

Why can’t all specimens be reintroduced to nature?

As we’ve already mentioned, the initial idea was to reinsert the injured mother with her calf, but because of the mother’s passing and the baby being in the lactation stage, the chances of surviving on her own were very low. It wasn’t possible to return these two little ones to their natural habitat because the troops would reject them as their smells were foreign and different from the family group. They could’ve ended up abandoned or killed. Monkeys are not solitary creatures, socialization (as for humans) is vital for their development and survival.

The alternative to reintroduction is to create a new troop. In this process, you can monitor their adaptation to the new environment and have more control over certain factors such as their interaction with other specimens and medical control.

Xcaret as the leading center for animal care in the region

We toured the main areas of the Department of Conservation:

Our first stop was the kitchen. In this impeccable place, the diet of all the fauna of Xcaret is prepared. In the background, pasted as regular orders in a restaurant, you’ll find each specimen’s nutritional requirements, generated by specialized nutritionists. This isn’t the only similarity to “human” consumption centers… Xcaret specimens aren’t fed with food scraps. The standards are high and they consume products that you could find at your local supermarket.

In an orderly manner, they begin to stack boxes and boxes with fresh food. Lettuce for the manatees, chopped fruit for the macaws, etc.

Once inside the clinic, we were very surprised by all the avant-garde equipment they had… Clinical laboratories to analyze samples, specialized X-ray equipment (capable of being transported to more complex habitats such as the manatee’s), ultrasound equipment, always-stocked pharmacy, breeding areas with incubator, artificial rearing room, and the list goes on. Periodic checks are carried out on all fauna as part of the preventive medicine plan and commitment to animal health.

In addition to specialized equipment, there are experts in animal behavior and veterinarians with great experience, such as Ana. This makes Xcaret the most complete and prepared animal care center in the region. Allowing them to help other institutions to fulfill their mission of animal conservation. All processes are attached to the guidelines of the Federal Attorney for Environmental Protection of Mexico (PROFEPA).

Wild animals are not pets

To talk about protection of the spider monkey at Xcaret, we must address animal trafficking. Monkeys are a social species, it’s within their nature to create bonds. Having them as “pets” may strike as a good idea but it’s not. We must remember that a wild specimen will always be wild. Primates can present aggressive behaviors when they begin to have hormonal influences.

This perpetuates animal trafficking, which, according to the El Universal digital portal (2019), is the third most profitable business in the world. Did you know that at least 5 members of the troop die in order to capture a baby? An even more common case is parrots. It’s estimated that for every parrot that reaches a family, 100 may have died in the process (capture, transport, etc.). Don’t buy wild animals. Not generating demand is the best way to end this practice.

What to do if you know of a case of wildlife being kept as pets?

In Mexico, all complaints of possession of wild fauna or injured specimens are dealt with by PROFEPA (Federal Attorney for Environmental Protection). If you have a wildlife sighting, we recommend keeping your distance and not trying to interact with them. Make sure to reach out to the corresponding federal authority of your country.

Why shouldn’t you feed the wildlife?

Every living being has a function in the ecosystem. We have, to mention a few, pollinators and dispersers. When we feed the fauna, they get used to obtaining their food effortlessly. This changes the ecological dynamics, in addition to their natural diet. Many times, we see wild animals that remain in certain urban areas due to easy access to food. If we want to have free animals that fulfill their niche, let’s avoid feeding them.

It’s well known that we share many characteristics and behaviors with monkeys, so we invite you to empathize with the preservation of the species on the #WorldMonkeyDay (December 14th) or any other day.

Next time you visit the park, take a tour to the Spider Monkey Island, where you can learn more about these specimens and also join our environmental education mission. Hopefully, the protection of the spider monkey at Xcaret will inspire you to make small but meaningful changes.

Finally, a special thanks to the veterinarian Ana Cecilia Negrete, who opened the doors of the Xcaret clinic to us, introduced us to her beloved troop and made us aware of the important work of animal welfare that they carry out every day as a team.

No primate should be held captive as a pet. That’s why highlighting the protection of the spider monkey at Xcaret is so important.

Help us stop this practice by sharing our Xcaret Blog with more people. 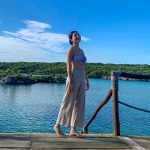